Light in the Desert

Photographs from the Monastery of Christ in the Desert

After being imprisoned in Afghanistan while on assignment for Life magazine in 1989, photojournalist Tony O'Brien sought solace and perspective at this monastery near Abiquiu, New Mexico. During his year-long residency, O'Brien was granted rare access to photograph the monastery and the daily activities and offices that have been kept in a tradition dating back to the Middle Ages.

"Tony O'Brien and his camera open for the viewer a window into a spiritual world that would otherwise likely be closed. His exquisite black-and-white images allow one to see -- it's almost as if we are eavesdropping -- the monks' life of seclusion, of course, but also within that quietude there exists a communal life of physical labor, of silent and collective prayer, of study, of the chanting of all 150 Psalms, all those activities threaded together in year round rituals."
-Albuquerque Journal

"Imprisoned by the Afghan secret police for six weeks while on assignment for Life magazine in 1989, O'Brien sought refuge and perspective at the Benedictine monastery. He returned to do a story in 1994 and in the process became a member of the community. His year-long spiritual sojourn granted him rare access to daily life in a community living a tradition dating to the Middle Ages."
-Journal North

"In 1994, O'Brien spent a year living at the monastery, traveling from his family's home in Santa Fe to live in an austere cell at Christ in the Desert for two-week stretches. Though never a monk himself, O'Brien was welcomed as a full member of the community and expected to partake in the demanding daily rites. He had free rein to photograph life there at a time when the facilities were even more Spartan than they are now. [O'Brien's pictures] showcase how the monks are in many ways melded into the dramatic landscape of cliffs, chollas, and juniper through their daily devotions of work and prayer. The book features selections from O'Brien's 1995 monastery journal, in which he documents just how much of the day is devoted to supplication and ritualized devotions to God."
-Pasatiempo 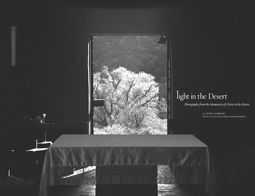