Bio: MaLin Wilson-Powell is an art historian, author, and independent curator who has written, taught, and lectured widely on American Modernism and contemporary art. The books she has edited include The Hydrogen Jukebox: Selected Writings of Peter Schjeldahl, 1978–1990 and Last Chance for Eden: Selected Art Criticism by Christopher Knight, 1979–1994. She is contributor to numerous publications including Jerry West: The Alchemy of Memory by Jerry R. West and John Connell: Works 1965-2009. She lives in Santa Fe. 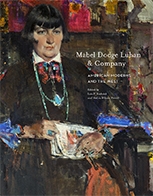 American Moderns and the West