Three Generations of Tradition and Modernity at Taos Pueblo

Eva Mirabal (Eah-Ha-Wa, Fast Growing Corn, 1920–1968) studied for six years at the Dorothy Dunn Studio art program in Santa Fe, where she was a favorite of the program’s founder and served as an assistant to Dunn’s successor, Geronima Montoya (P’Otsunu, 1915–2015, Ohkay Owingeh Pueblo). By the time she was twenty years old, Mirabal was exhibiting in museums and galleries across the country. Mirabal’s first exposure to art was through her father Pedro Mirabal who was a popular model, along with Eva’s father-in-law Geronimo Gomez, for members of the Taos Art Society and for modern artists who came to Taos as part of Mabel Dodge Luhan’s circle. Pedro sat for a bronze bust created by Maurice Sterne and for a portrait by Nicolai Fechin, Pietro, now in the collections of the Eiteljorg Museum of American Indians and Western Art. Gomez, one of the leaders of the Peyote religion at Taos Pueblo, is the non-traditional figure depicted in Ernest Blumenschein’s controversial painting Star Road and White Sun. During World War II, Eva enlisted in the Woman’s Army Corp (WACs) in 1943, the only WAC assigned as a full-time artist. She was very likely the first Native American woman to publish a comic strip, the feisty G. I. Gertie. During the same period, she worked on two significant mural commissions. After the war, Eva was a visiting professor of art at Southern Illinois Normal University. Following her return to Taos Pueblo, she studied at the Taos Valley Art School on the GI Bill. Throughout her lifetime, her paintings and murals received national acclaim. After her death in 1968, Eva’s teenage sons discovered a treasure trove of her life story. In a huge pine box that she had nailed shut, she placed scores of her drawings; family photographs; diary entries; newspaper clippings; and hundreds of letters related to her life and work that she received from curators, gallery owners, friends, and teachers over the years. Drawing on this rich and invaluable archive, as well as on interviews with family members, Rudnick tells the story of Eva’s brilliant but brief and impactful career as a Taos Pueblo artist, along with the story of the artistic legacy carried on by her son Jonathan Warm Day Coming. 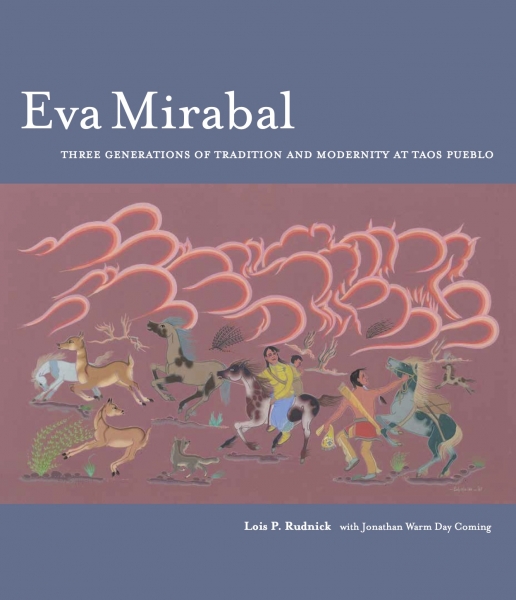