In Search of Dominguez & Escalante

Photographing the 1776 Spanish Expedition Through the Southwest

In 1776, Franciscan friars Francisco Atanasio Dominguez and Silvestro Velez de Escalante embarked on an expedition to seek an overland route from Santa Fe, New Mexico to Monterey, California. This expedition is widely regarded as one of the great explorations in western U.S. history for its documentation of the Native peoples in the Four Corners. More than two hundred years later, photographers Greg Mac Gregor and Siegfried Halus have created a remarkable visual record of the expedition.

"Superbly illustrated with black-and-white plates by two renowned photographers and educators whose work has been exhibited internationally, this book is an invaluable treasure trove for the general reader and aficionados of historic trails."
-Colonial Latin American Historical Review

"Greg MacGregor and Siegfried Halus retrace Dominguez and Escalante's arduous eighteen hundred-mile trek through the Southwest with cameras in hand and Escalante's journal to guide them. The work provides the first photographic record of the entire route with beautiful images that reveal the seemingly timelessness of the region's peoples and landscapes. The authors provide excellent editorial notations and maps that lead readers through the journal entries and photographs. The work is a gem for anyone intrigued by this period of exploration in the Southwest and modern efforts to preserve our endangered historic trails for future generations."
-New Mexico Historical Review

"In 1776, Franciscan friars Atanasio Dominguez and Silvestre Valez de Escalante set out on an expedition from Santa Fe to Monterey, California, that historians widely acknowledge for the quality of its documentation of the land and the Native peoples. In recent years, Santa Fe photographers Greg MacGregor and Siegfried Halus set out to retrace this 1,800-mile journey, document the places and people they encountered, and reflect on the original expedition's challenges and accomplishments. This handsome coffee-table book begins with historical context and essays from the photographers about their approach. Then, using ample excerpts from Escalante's journals and their own observations, they recount their circumnavigation of the Four Corners area. Their journey through New Mexico takes them past a penitente morada in Abiqui, abandoned buildings in Tierra Amarilla, and the Isleta and Laguna Pueblo reservations -- all of which they capture in elegant black-and-white photography that lends quiet grandeur even to decrepit sights along their route. This is history at its best: In Search of Dominguez & Escalante thoughtfully revisits a little-known aspect of the past with a deep consideration for how history has affected places and people today.
-New Mexico Magazine 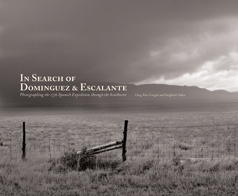