Bio: Jim Sagel (1947–1998) was a prolific and acclaimed New Mexico writer, storyteller, and educator. During his lifetime, Sagel published numerous books of fiction and poetry including Dancing to Pay the Light Bill, Garden of Stories, and Where the Cinnamon Winds Blow. In 1981, he was awarded Cuba’s Premio Casa de las Américas for his story collection Túnomás, Honey. Sagel was the second US citizen to win the prestigious award and Tunomás, Honey remains his most-recognized work. In 1997, Sagel won Spain’s El Premio Literario Ciudad de San Sebastián for best Spanish-language play, Doña Refugio y su comadre. Sagel was the first person outside of Spain to receive the award. In 1993, Sagel was honored with the New Mexico Governor’s Award for Excellence in the Arts.

Dancing to Pay the Light Bill

Essays on New Mexico and the Southwest

Where the Cinnamon Winds Blow 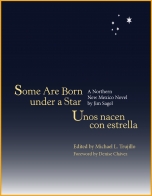 Some Are Born under a Star/Unos nacen con estrella